Happy Wednesday!
On Saturday, I attempted a new-to-me craft project-- candlemaking!
It was lots of fun, and not nearly as complicated as I'd thought it would be.

I made six vanilla-scented beehive candles!
I originally made these because I wanted to send a few to my partner in a swap over on Ravelry.  I sent out her package yesterday, complete with two candles!  But I don't think she reads my blog, so it should be okay to give you a sneak peek. :)

First I made a makeshift double-boiler with a soup can and a saucepan and melted some paraffin candlewax.  In another can-and-saucepan arrangement, I melted yellow solid candle dye and vanilla fragrance, then added that to the wax.

I dipped some candlewick into the wax to prime it, so that the candle will light more easily, and threaded it through a rubber candle-mold.  Then I put the mold into a jam-jar of cold water, and when the melted wax reached 190˚F, I poured it into the mold.  The cold water helps the candle cool and solidify. 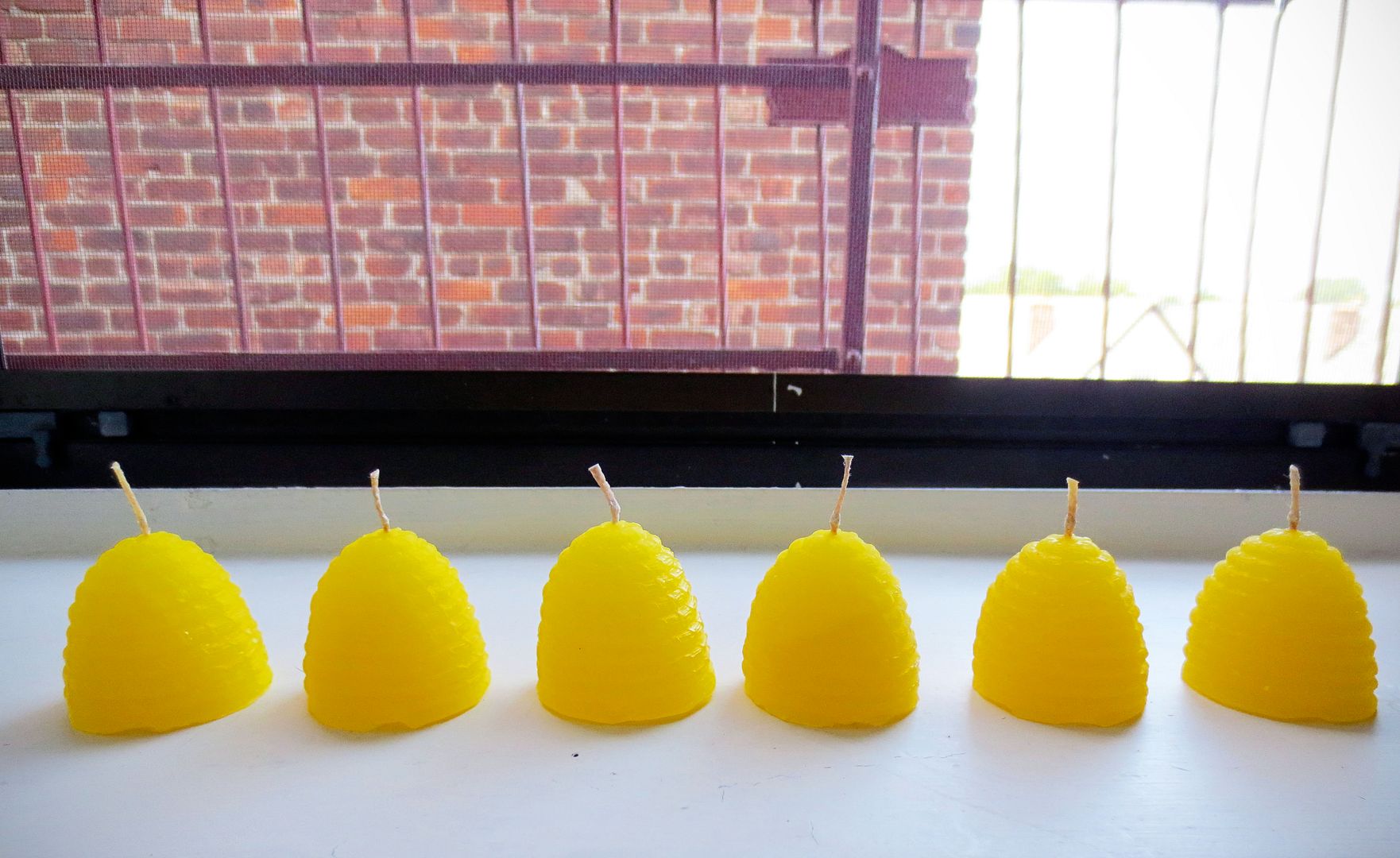 When the candle was completely cool, I peeled back the rubber mold and trimmed the wick.  I repeated the whole process five more times, and ta-da!  Beehive candles!

Bucky was very helpful-- he snoozed in a box on the kitchen floor.  Occasionally he got up for a snack, which was so exhausting that he had to go back to sleep.
It's a rough job, but somebody's gotta do it.

I hope you're having a wonderful week!
♥

Happy Saturday, lovelies!
Today I'd like to share a few photos that I took at my mom's house before I moved.

Today I'm trying something new-- I'm making my own candles in the shape of little bee skeps!
My first one is cooling at the moment-- I'll show some pictures when they're finished!  Bucky is contributing to the project by sleeping in a box on the kitchen floor.  He's a helpful guy.

Have a wonderful Saturday!

Hi there!  I've been settling into my new routine, exploring my new neighborhood, and just generally getting into the new-ness of things.  I think I'm finally ready to work blogging back into my schedule!  I've been taking lots of pictures and doing lots of fun decorating and knitting projects, and I'm excited to share it all with you!  I'm going to try to get back to posting a few times a week.

By the way, that picture is the view from my kitchen window every night at sunset.  It turns my off-white walls to gold and pink and lavender.  It's a pretty magical view to come home to.

I hope you're doing well, I'm looking forward to catching up on all of your blogs and projects!

I'm Julie Rose. I'm a fashion designer, a knitter, a wearer of pretty dresses, and a collector of sweet stationery.