They liked me, they really liked me!

The lovely pair of etsy sellers that make up QBranchLtd have featured me on their blog, The Art of Craft.  In addition to featuring etsy sellers, they discuss the handmade cultural movement and its implications for society on the whole.

Check out my interview here!
Posted by Anonymous at 10:25 PM No comments:

Wonderland is a crowded place

I was poking around Netflix the other day, and one of the movies that was recommended for me was Phoebe in Wonderland.  I was a bit wary, because I absolutely love Alice in Wonderland, but in a very purist kind of way-- I haven't even seen the latest remake of it.  But the synopsis sounded interesting, so figured I'd start watching it, and I really enjoyed it.

Phoebe in Wonderland is the story of an imaginative and curious girl who is trying to work through some behavioral issues, while the adults around her try to help her.  Phoebe's interactions with other kids improve after she becomes involved with a school play of Alice in Wonderland.  And those adults?  They make a mess of things, except for Phoebe's drama teacher. I usually absolutely hate any depiction of precocious children, as Marissa can attest after seeing me mock Michelle from Full House every time she said some scripted thing that was supposed to be "wise."  It always seems so contrived and a cheap 'aww' moment.  But Phoebe in Wonderland wasn't like that at all-- Phoebe was portrayed as a sweet but believably flawed girl, intelligent but not weirdly 'knowing.'    This was a really great movie to watch just for the visuals, too-- between the plot and the color story, it reminded me a lot of Amelie. The lighting was pretty and dreamy, the color story for each character fit perfectly, just a very nice film to look at.  I definitely recommend watching this movie, it's touching and relevant and well-done. Then I watched another Wonderland themed movie... Malice in Wonderland, from 2009, had a good basic premise and.... that was about it.  It was meandering and while I can see where those who are into the trippier aspects of the original Alice might enjoy it, it just didn't do much for me. Honestly, I think my main issue with this movie was the portrayal of Alice as this sort of Lolita character.  I really can't stand when she's portrayed that way.  For instance, in this version, Alice gets amnesia and is left to blink innocently at a bunch of increasingly sketchy men.  In bars.  And their cars.  And asks them for a ride home.  And she follows them all over London (Wonderland, sorry) because she just trusts them so much.  Puh-lease.  I guess part of why I was so disappointed with this movie was because the idea is actually pretty good, to hint at the classic Alice while putting a modern, edgy spin on it, but the execution was mediocre.

There was one saving grace to this movie, though... The actor who plays the equivalent of the White Rabbit, Danny Dyer, is pretty cute.

Here are some pictures of my room and what I've been doing in it... But first, click play on this video, it's the perfect soundtrack for my room.  Yay!

Ok, so, my room!  It's pretty similar to my room last year, except that the wall decals are more elaborate and I now have a big cozy blue chair in one corner.  It's the nicest thing, it's really big and I can completely curl up in it.

There's something about going grocery shopping and then coming home and putting them away that makes me so happy.

I have a slight obsession with black ballet flats.  I just love them.  I was lucky enough to be given a big box of different vintage bows and beaded shapes recently, and I knew they'd look so perfect on black ballet flats, but I didn't want to have to buy ten pairs of shoes to put them on (well, okay, yes I did want to, but it would be totally impractical) sooo... 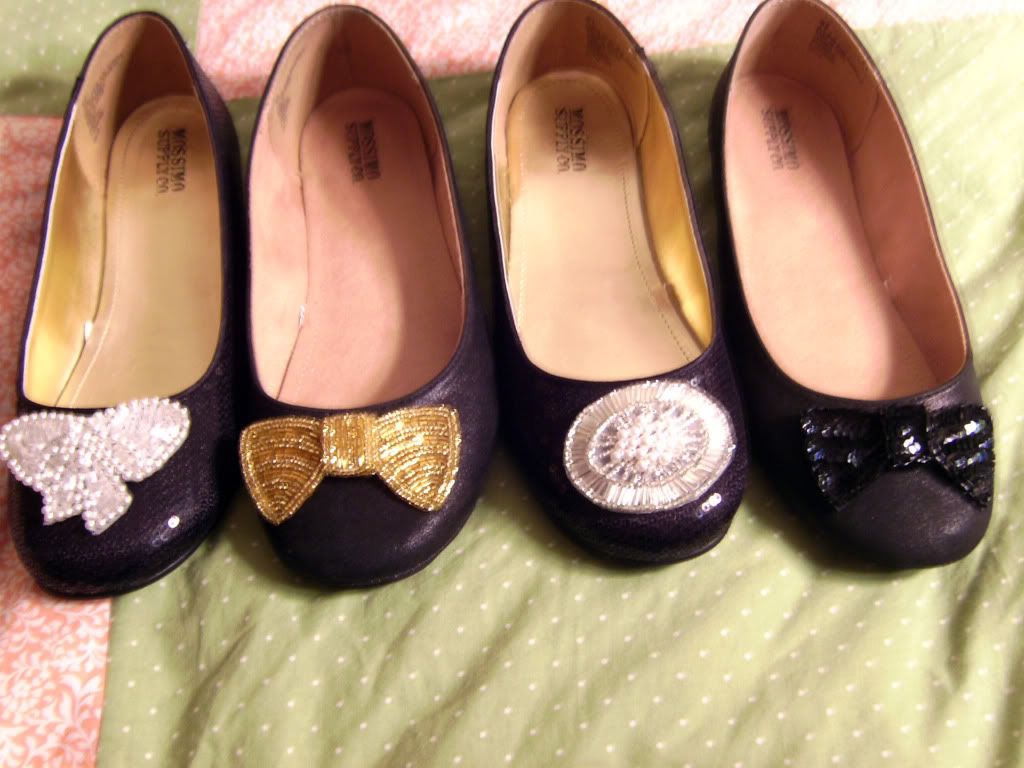 velcro-on ballet flat embellishments!  I put the fuzzy sides of stick-on velcro dots on the shoes, and then put the hook side of velcro dots on the back of the bows and beaded shapes, and now they can be changed whenever!  Wheeeeee!

After some trial-and-error, I've finally pretty much gotten the hang of using the knitting machine for my machine knitting class.  Here's one of the swatches I knitted!  It's sooo fast, this took maybe 4 or 5 minutes to do.

Happy Saturday! ♥
Posted by Anonymous at 10:31 PM No comments:

The first week of school is going really well-- I only have one more class, tomorrow morning.  They all seem interesting so far, and I hadn't realized how much I missed actually creating garments last semester.  I'm especially excited about my knitwear design class and my knitwear pattern-making class. Having three days with only one class is great, too, because I don't have to save all my errands for either after a class that ends at 9:20 p.m. or the weekend.  Although we keep being told that fifth semester is really rigorous, it doesn't actually seem like an unmanageable amount of work thus far.  Of course, having one liberal arts class instead of three is helping that situation, too.

Over the summer, my dad grew pattypan squash in our garden.  They're the cutest vegetables ever!  They look like big spinning tops, or maybe baskets with flower-shaped lids. These aren't the ones my dad grew, I didn't get around to taking a picture of them before leaving for school, but they're still soooo cute! 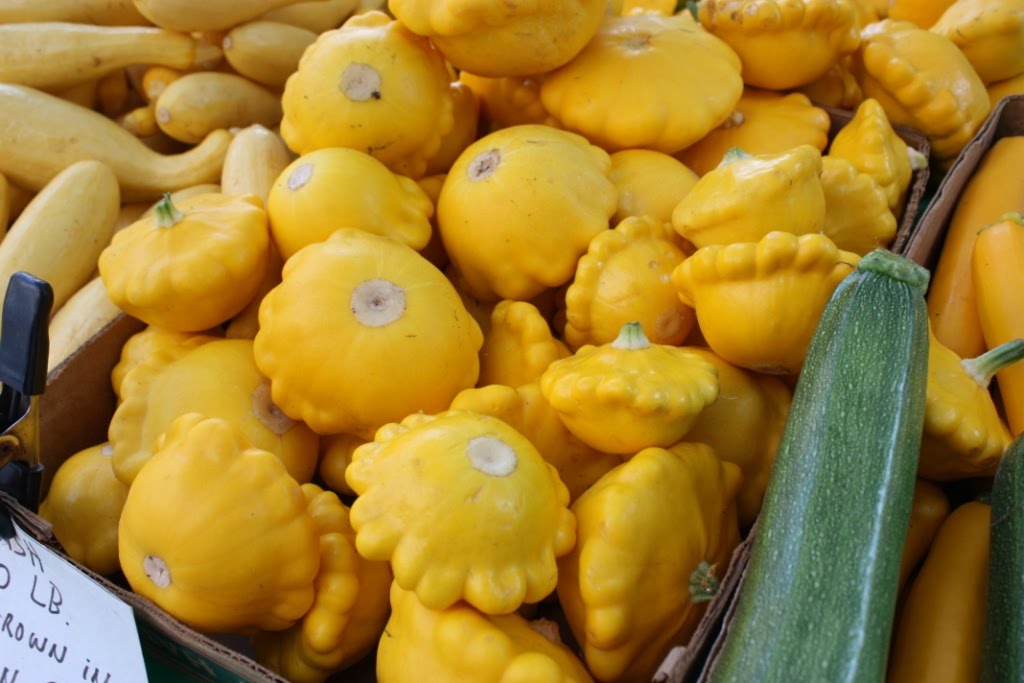 Here are a few songs I'm listening to lately...

Painting by Chagall by The Weepies

Electric Twist by A Fine Frenzy (sorry for the commercial at the beginning, it was the highest-quality video I could find.)

Running With Scissors by Ben Lee

They're all really good songs to have on while walking, too.  ♥

I updated my etsy shop with more button bobby pins!  Thank you so much to the lovely and talented Lindsay for her review of my button bobbies!  Her blog is so cute and thought-provoking.

Hope everyone's having a great first week of school, if it was your first week.  Otherwise, I hope you have a great week in general! ♥

I'm Julie Rose. I'm a fashion designer, a knitter, a wearer of pretty dresses, and a collector of sweet stationery.